Adam Moores from the United Kingdom, has been living in Eindhoven for just over a year now. Adam worked as an engineer in the aircraft industry for 10 years before he moved to the Netherlands. And here he is now, working for Trumpf!

Why did you choose to work abroad?

“There were a few reasons. First, it was a perfect time for me personally. I had progressed as far as I could in my last role, and I was searching for new challenges. Second, a lot of friends were telling me ‘you need to go to Europe’, and specifically to the Netherlands. My friends told me that it is THE place where all the tech companies are. It’s where the future is. ‘You need to go there because you’re wasting your talent here’. So I took their advice! I looked into ASML – Trumpf, and they were hiring. I applied for the job, and now here I am!”

If you look back on where you are now, would you still choose to work abroad?

“Yes, definitely, because back where I was, I basically stagnated. I had consigned myself to the idea that this was it for me! I ended up pushing myself. I wanted to do new things, see new things, and work on different things. I made the jump, and luckily a lot of things fell together at the right moment! It is absolutely worth doing. If the opportunity comes up to someone else, I would say take it! It was a life-changing moment.”

What has working abroad brought you?

“Basically a new outlook. I’ve never left the UK before, I lived in a small town, and then I moved to the city. I thought that was already amazing. Now I’m in the Netherlands, and it’s a whole new world! You’re constantly meeting new people, constantly learning new things. There are always new things to see and to do.”

What kind of support did you expect, with the process of working broad?

“I actually didn’t expect any support. I had had previous interactions with other recruitment companies that sort of pick you up as a number and just drop you into job offers. So all you could do was hope for the best.

When I arrived here, I was just shocked at how well Xelvin arranged everything. My arrival was planned well in advance, and everyone knew about it. They informed me well, and I knew what needed to be done. I expected to just get here and start making a plan myself and try executing it the best I could. But most of it was taken straight out of my hands, which was great!”

How did you obtain information about working abroad?

“A friend of mine suggested that I should move to Europe, as a general idea, so I looked into many countries. As I dove more into the engineering business and saw where they are operating, I knew I had to move to the Netherlands. The internet is the best way to orientate yourself about working abroad. I had a few people I worked with who had worked abroad before, so I had contact that I could speak to, get their ideas of where to be, what to do, and who to look for. I used the internet to get more details!”

What makes Xelvin unique in your opinion?

“I’ve been contracted by other firms before, and in those places, you very much feel like you’re just a name that is dropped into a location. But with Xelvin, you very much feel like you’re a part of the team that you’re working with. When we first arrived at Xelvin’s office, the first thing they did was show me around, and we played dart and ping pong, sat around and had a chat. After that, we spent several days in the city and went to the Philips Stadion for the Christmas celebrations. It was a lot of fun, and that is what makes them unique.”

Do you have any advice for other people thinking about making the move?

“If you’re already considering working abroad, you’re already at the point where you know it would be the best for yourself. And that is all you need to know. So do it!”

Are you also interested in moving to the Netherlands? Then, have a look at our vacancies! 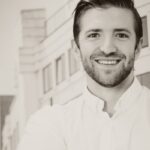