Cody & Raadiya – All the way from South-Africa!

Cody and Raadiya came to the Netherlands to work for ASML and Trumpf. They both grew up in South Africa and studied mechatronic engineering. Cody had worked for multiple companies in the mechatronic and automotive sector, and he is now in the Netherlands with his wife, Raadiya! Raadiya spent most of her professional career at Siemens, and now she is here, working for Trumpf. Doing what she loves; engineering!

So why did you both choose to work abroad?

“We were looking into moving to a different country because of the political situation in South Africa. We’re ambitious people, and we wanted to surround ourselves with people in an area with the same mindset. We knew it had to be a developed country where people speak a lot of English because learning a whole new language is not that easy. The Netherlands was the country that we found the most promising, in no small part due to Xelvin. They were extremely straightforward and transparent in what was going to happen. The Netherlands seemed like a perfect place for us. We felt like the contact we got, especially from Lieke, made us feel we could trust her. She is always accommodating, upfront and honest with any delays. That trust factor was always a big element because you’re always thinking in the back of your mind, ‘Is this real?’ ‘What consequences will we face?’.”

“After we applied for the position, Lieke contacted us via email and then gave us a call. A call is always pleasant. It’s nice to hear a human that can pronounce your name! Xelvin seemed like a great opportunity, and the process was relatively easy because we were already in a state of mind to leave the country. The next thing we knew, we were in the Netherlands. It was in December, and in February, we arrived in the Netherlands. It was a crazy and fun time!”

What have you encountered during the process of working abroad?

“In the beginning, the weather affected us a lot. The summer here is perfect, but the winter, on the other hand, can be freezing. It took a while to get used to the weather because, in South Africa, there’s not a big difference between winter and summer. Also, the whole cycling culture, everyone rides a bicycle here in the Netherlands. We were in shock. Even 80 year old’s were cycling. We thought it was a joke. They’re even faster than us, because of the electric bicycles!! And as we’ve mentioned before, personal and political safety. It was a bit of a culture shock. The kind of society here is amazing. It allows people to enjoy the country. You see so many people sitting in the parks, it is so nice to see, and it is really safe.”

What has your experience working abroad given you?

“South Africa has a large group of different people, so you get that sense of different cultures. Coming to the Netherlands, with the vibrant ex-pat community and all the companies with lots of different cultures, we get the same feeling. We’re proud of the new and different experiences we can have with these new people, and that is what we really enjoy. Work is good, but the environment is engineering. It is very lean and practical in that sense, but we think that the greatest gain is learning new things from other people and interacting with each other.”

“The most interesting part about the Netherlands for us is the country’s development, the infrastructure, the houses and the canals. The things that we moved for, and we were hoping to find, we found them! For example, the stability of the country. That was a crucial factor for us. We were coming from chaos. We wanted a place to settle ourselves and a place where we could invest our time. Safety was also essential for us, just being able to go outside and cycle at night, it’s a whole different way of life. So we’ve decided to stay here, we’ve even bought a house! The Netherlands is a good place to build a future.”

How do you see the process of working abroad?

“We were already working, so we were in the motion of it. The adventure started when we were abroad. We felt a bit anxious initially, but once we contacted Xelvin and they arranged everything, we were relieved because it was a lot easier than we thought! It wasn’t even a process for us. We just needed to get used to it.

How did you both obtain information about working abroad?

“We used websites where you can apply for jobs, and we were looking for work abroad in different countries. So we used our favourite websites and apps, and it was just a matter of applying. We also joined seminars, which gave you some information about what you need to do.”

What would be your advice for other people thinking about making the move?

Make sure you carefully consider the reasons why you want to move abroad, whether that be a career opportunity, financial reasons or even just for an adventure. Think about the challenges you may expect by not seeing your family for an extended amount of time and how you will deal with that. Involving yourself in the culture of a new country helps with feeling welcomed, so learning the language is the best way to integrate. Writing a list of pros and cons and put these into priority of importance. Staying vs moving. It helps to get a clearer picture to decide if moving abroad is something for you. The decision you make is life-changing, so do not make this decision lightly.”

Are you also interested in moving to the Netherlands? Then have a look at our vacancies! 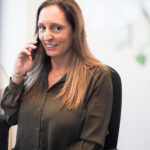